You are here:
Rob Roy News

A sold-out crowd enjoyed an evening of Scottish culture at the Confederation Place Hotel in Kingston. The evening started with an informal gathering in the bar area where participants were able to inspect the silent auction items. Kaj Sullivan piped the doors open and once everyone was seated, some entertainment was provided by a Rob Roy mini-band and some fantastic dancing by our own highland dancers. 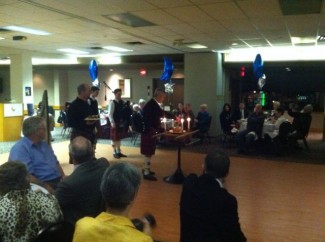 Rick Hamilton gives the Address to the Haggis

The Selkirk Grace was recited by Lyn Bell after which the haggis was piped in by MacGregor van de Ven. A rousing and energetic address to the haggis was given by Rick Hamilton. The haggis was uncommonly good as was the main course.

Erica Pulling’s skillfuly played harp accompanied dinner.  A rather disciplined (and brief) speech was given on the immortal memory of Robbie Burns by James van de Ven and his assistant Jeff Willis.   Kent Stewart followed-up with a toast to the Rob Roy band to acknowledge the hard work and achievements of the 2011 competition year.   And finally a lively toast to the lassies by Drew Wallace followed by the response by Sheila Wallace.  The evening carried on with some Scottish country dancing, more dancing, and finally some drumming by 4 year-old Callum Nicholson accompanied by piper MacGregor van de Ven. A great evening was had by all. Until next year!
[nggallery id=7]