The North American Pipe Band Championships were held in Maxville on the weekend and members of the Rob Roy Pipe Band and Highland Dancers were well represented. In piping and drumming, solo amateur events were held on the Friday. Catherine Cairns placed second in Grade 4 snare and Jenna McMullen received a third place in Grade 5.  Chris Bell, the lead tip for the Grade 5 band, placed 6th in both the Professional MSR and Professional Hornpipe/Jig events.  Nick Harvey, who plays snare in the Rob Roy Gr.2 band, placed 6th and 5th in the Grade 2 MSR and Hornpipe/Jig events respectively. 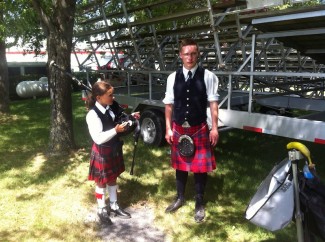 Rob Roy dancers also performed well in the dancing competitions which were held on Friday. Maggie Cantarutti placed 1st in the Scottish Lilt and also received 5th and 6th placings in other events. Fiona Duffe won three 4th places in her dances. Marina Aitcheson and Madison Westcott also placed in one of their events.

The band events were all held on Saturday under extreme heat. The grade two band was very pleased with their two performances – March, Strathspey & Reel and Medley. Competing bands came from the rest of Canada and New York with the band from Metro New York winning the top prize. Although Rob Roy wasn’t in the prize list at this event, they received very favourable comments from the judges. The grade five band competed at the end of a very hot day. The very large number of bands in this category produced terrific performances and our grade five group finished 4th in the prizes.

The Grade 5 band will finish off the Ontario competition season by competing in Fergus and Almonte Highland Games later in August. Both bands will also travel to Loon Mountain Highland Games in September. Dancers will be attending several highland games and competitions throughout August. Good luck in the remaining events everyone!