The Rob Roy Highland Dancers were formed in 1967 as a small group of dancers.  In the over fifty years since their inception, the group has grown into a large organization which is one of only a few that is tied so closely with a band.  Students often register young and end up continuing through their teens.

Highland dancing is extremely athletic, using all parts of the body.  In addition, it is a creative art, with many opportunities for choreographing dances.  Rob Roy is a family organization and parents are an integral part of the organization through volunteering: they even sometimes take a class of their own.

Rob Roy follows a syllabus standardized by the Scottish Dance Teachers’ Alliance (SDTA).  Each spring, students have dance exams known as Medal Tests, in which they are tested on dances at their specific level and provided with feedback from an SDTA examiner.

Throughout the year, classes are often invited to perform a variety of small shows in the Kingston area.  These include shows at local seniors’ residences, cultural showcases, parents’ night recitals, and ceilidhs.  Students are also encouraged to participate in the many parades the organization is involved in throughout the year, including Santa Claus, St Patrick’s Day, and Canada Day parades.

Parades and shows are great ways to showcase old and new dances, as well as socialize with others in the group.  Often it is these events which help to form the lifelong friendships which are so common in the organization.  Advanced students may be asked to join the Performance Group, which choreographs dances and performs with the Rob Roy Pipe Band at larger-scale shows, including Fort Henry, some out-of-town events, and in Scotland. 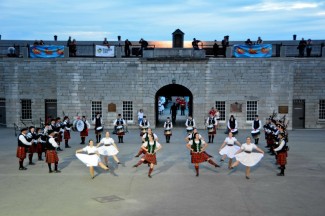