The grade 4 band has continued their excellent season with wins at 3 more contests. In Georgetown the band placed first and won best pipes, best drums and best bass.

On a beautiful sunny day in Cobourg the grade 4 band took home first place in the medley contest. Way to go! 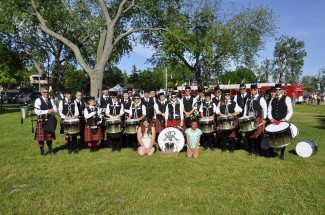 After a long drive to Kincardine on the shores of Lake Huron the band received a second in the march medley contest. After competing they found some time to enjoy the beach!

And finally after playing in a downpour at the Cambridge highland games the band received first place in the medley contest! Next up for both bands is the Glengarry Highland Games in Maxville on August 2. Good luck!